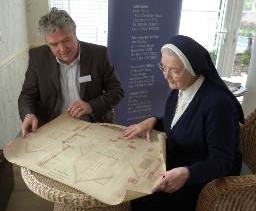 A surprising discovery was made at Southworth House last year. A blanket box, which had been left in the storage cupboard behind our cinema, was found  to contain a number of old architect’s drawings of the  very first building  on the  site. The original property, which was an imposing  Victorian  villa called  Beardwood Cliff was built for Daniel Thwaites  II, son of the  founder of the  renowned local brewery. It was completed in 1858 and became an imposing feature in the local Ribble Valley landscape. The Sisters of Nazareth on acquiring the site in 1917 created the Nazareth House Care Home and so began the tradition of care for older people. By the 1980s their original house was compromised by dry rot and other health and safety issues and was demolished.

There are  many  photographs of the  old building  and  the  grounds but  the discovery of the  original plans  was exciting;  The drawings, are  beautifully hand drawn  in colour, and  are signed  and  dated by the  architect, James Patterson in 1858. They cover all aspects of the  buildings  including  the  main house, the  gate  house and  out  buildings  and  provides us with an insight  into the beauty and  complexity of the  original design.