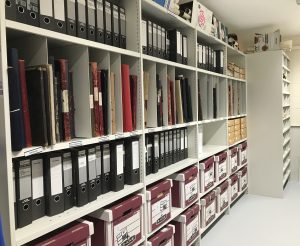 The Archive is a private archive belonging to the Generalate of the Sisters of Nazareth which can be accessed upon request. It is a safe repository for material deposited by the Superior General, General Councillors and Sisters throughout the Congregation. The Archive holds a wealth of historical documents, including record books, registers, photographs and artefacts, relating to the work of the Sisters throughout the world. Our holdings date from the very beginnings of the Congregation in the 1850s to the present day.

Over the years the Archive has proved to be a valuable resource for Sisters in the Congregation, former residents, family historians and academic researchers. The Generalate Archive is managed and cared for by the Archive team.

1. Relations between the Congregation and the Holy See

There are important historical documents regarding the foundation of the Congregation and the continuing relationship between the Sisters and the Holy See.

This includes detailed original correspondence from Cardinals at the Vatican, Cardinal Wiseman in London, Father Bernin, Mother St. Basil and others; also Petitions to Pope Pius IX.  One of the most important documents held in this Section is the official approval by Cardinal Wiseman of the work, title, habit, and Constitutions of the Sisters of Nazareth in London and  Aberdeen dating from 1864.  Many of these early documents have been preserved in what is known as ‘The Green Book’. 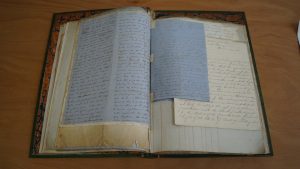 We use this material for research into the early history of the Congregation.  Many of the documents were invaluable for the research undertaken by Father Lawson SJ, Sister Magdalen Ita O’Halloran, Dr Peter Hughes and Dr Eileen Pickard and others who have written about the Sisters of Nazareth.  Some of the documents and correspondence also illuminate the difficult years for Catholics following the Restoration of the Hierarchy just prior to Victoire Larmenier’s arrival in England. 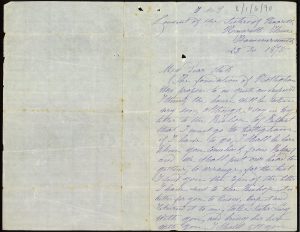 This section of the Archive brings together all the material regarding Victoire Larmenier, including all her surviving correspondence with the clergy (for example: Father Bernin, Father Vial), with Sisters (for example Mother Mary of the Nativity Owen) and with friends and benefactors of the Congregation.  There are also diaries and personal belongings, some of which can be seen here, as well as portraits and tributes. Mother St. Basil’s vision for the Sisters of Nazareth remains at the heart of the Congregation today.  There is on-going interest from Sisters and others in all the material relating to her.

3. Books of Rule and Constitutions of the Congregation 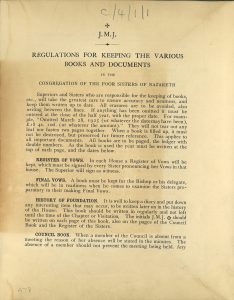 This section comprises the Directories, Books of Custom and Constitutions of the Congregation of the Sisters of Nazareth right through from 1960s to present day.  These were compiled by the Superior General and her Councillors and were frequently updated.  Some of the copies held contain hand-written notes and alterations.

We regularly consult these Directories to find out how the Sisters undertook their work in the past.  The Books of Custom give a fascinating insight into what life was like for the children and elderly in the care of the Sisters at different points in time.  This is very useful when family historians want to know how their relatives were cared for in the past.

The Sisters were well-aware of the need for keeping accurate records as can be seen from these Regulations.  All the records relating to children or residents were held, until the 1970s, in bound Registers and Record Books with very few loose documents. 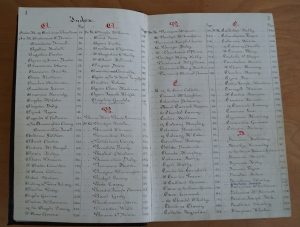 We have here material relating to all aspects of the Governance and Administration of the Congregation, including documents relating to the General Chapters, the General Council, and items produced by individual Councillors.

This is a large part of the Generalate Archive, with many interesting Record Books including the Chapter Minutes and the History of the Foundation.  This latter History is a contemporary diary of events throughout the Congregation and is an invaluable source of information.  Also held are the Sisters’ Employment Registers and other official records regarding Sisters, records from the Bursar, including the Estate Books, which record the foundation of each House, annual statistics, and detailed information relating to all the Superiors General following Mother St. Basil.

This section of the Archive is very well-used.  We constantly use the History of the Foundation to check dates of specific events or to read accounts of the founding of different Houses.  There are many interesting stories relating to visitors to the Hammersmith House, including by Royalty and Church dignitaries.  We also refer to the Sisters’ Registers regularly to undertake research into Sisters’ lives and the work they have done.  Again, family historians are often interested to know about the lives of their relatives who entered religion.

Material relating to the administrative regions within the Congregation including regional chapters and council minutes. Today this area of the archive has largely been superseded by the creation of regional archives throughout the world.

There is a wealth of information in this Section for all the individual Nazareth Houses.  While the majority (though not all) of the Record Books and Registers are for the UK Region, there is much of interest relating to other Houses throughout the world.  As well as documents, there are photographs and maps or plans for many of the Houses.  There are also interesting accounts of the early foundations in South Africa, America, and Australia.

Biographical and employment information for individual Sisters, and some personal possessions and mementos, including certificates and awards.

This section houses material relating to specific Sisters.  In many cases little has survived, especially for the early Sisters, although there are early photographs taken at First Profession for quite a few Sisters.  There are also certificates and awards for some Sisters.  Personal possessions are few, but some information about every Sister can usually be found.  An obituary letter is written for each Sister at the time of her death, and these are a good source of information. 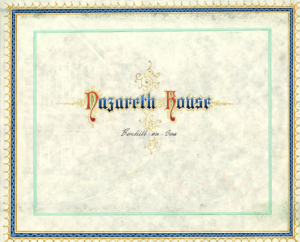 This is a large and ever-growing area of the archive – they say a picture paints a thousand words and that is certainly true in an archive collection such as this. We have photographs of buildings, Sisters and residents, events and celebrations. Some are loose, while others are in albums or framed. Some albums are compiled to commemorate a particular event which are invaluable and fascinating.

We have a truly eclectic variety of treasures including framed pictures, gifts, textiles/clothing, relics and religious artefacts, bound volumes, plates, trays and awards, tools and furniture, news cuttings and memorabilia … a fraction of which is on display in the Heritage Centre.