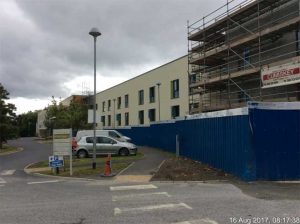 Last Easter we really thought we would be in our new building by now, unfortunately we aren’t  – we are nearly there, but not quite!

“Practical completion” of the first phase of the building project has been delayed as the Fire Officer now wants a lobby area created into the main kitchen and double fire doors there as well as alterations to the fire exit where the chapel was. The waiting period for these doors to arrive is six weeks and that work is now due to commence on the 9th of April and may take up to a week. We have been told that we will definitely have possession of the building on April 16th

So from that Monday on we will be able to do tours of the building with residents and their relatives and friends and people can start choosing their bedrooms!  We think you will be impressed when you get to see it as there is a great sense of space and light with plenty of communal areas and private spaces for everyone.

Just to re-cap again, there will be 104 bedrooms in this phase of the project. A unit of 30 on the Ground Floor which will be called Brook Green. On the First floor there will be two units. One will be where Donnycarney corridor joins on to 15 new bedrooms to create the Holy Family unit and a there is also a new 30 bedded unit which will be called Gahan. On the Second floor we will initially have only 15 bedrooms as the other 15 won’t come on stream until after the second phase is completed. This will be called Larmenier unit.

We are hopeful HIQA will come in by early May and do their registration inspection after which we can move everyone over. Once our 87 residents have moved over and settled in to their new surroundings we will be admitting people to the remaining rooms.

The second phase of the project will commence then. This will consist of renovating and refurbishing the old nursing home and creating a new convent, hair salon, shop and regional offices, converting the present dining room into an assembly hall and building the new chapel. Exciting times ahead!