The health, safety and wellbeing of our residents, staff and Sisters remains our top priority and visiting arrangements in Nazareth Houses and services are kept under review. Each Nazareth House or service can give details of any current guidelines in place, if required. Contact information can be found on each house page. We thank you for your understanding and co-operation. 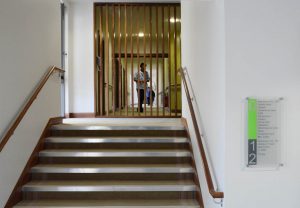 Victoire Larmenier, was Foundress and first Superior General of the Sisters of Nazareth.

She was born at Liffre, Ille-et-Villaine in Brittany, France. On 21st July 1827.   She had 3 sisters and one brother.

Her father was a shipbuilder and later in life a timber merchant.    Victoire was 11 years old when her father died of Tetanus.   She was very attached to him and throughout her life spoke of him with particular affection.

Shortly after joining a group of women with similar ideals, Victoire, at the request of Cardinal Wiseman, went to London in 1851 to work for the poor. With a few companions she founded the Congregation of the Sisters of Nazareth to help the destitute.

Victoire, foundress of the Sisters of Nazareth and her companions left Paris for London on April 10th 1851, arriving in Dover in the early hours of the next morning.   Not being allowed to spend the night in the waiting room they sought shelter in the streets.  They spoke no English and could not seek lodgings as they had not the means to pay for them.  Like Our Lord Himself they had ‘nowhere to lay their heads’. They willingly offered this first sacrifice for the success of their work in England.

Later in the morning they left for London and eventually arrived at their new home in Brook Cottage, Brook Green, Hammersmith.  It was a very small house with a little strip of garden in front and a yard at the rear. This was the first of three houses the Sisters would occupy before eventually purchasing land on the Hammersmith Road where the present head or ‘mother house’ of the Congregation is now situated.

In the late 1960’s the Congregation of Sisters of Nazareth felt that a central house in Dublin would be ideal for Ireland.  God provided the opportunity.

Miss Kathleen Gahan, 27 Leinster Road, Rathmines feeling the weight of her years called her Solicitor to make a will.

The idea came to her to leave her house to a Community of Sisters doing charitable work and our name happened to be 6th on the list of 10. Miss Gahan had not previously met any of our Sisters nor had we any connection with her.  This was her choice and she stuck with it.

Miss Gahan suffered a stroke about a month later and died on 4th November 1965.

The Sisters moved into Leinster Road on 7th October 1969.

On October 7th 1857 the Sisters and 120 residents moved into their permanent home on Hammersmith Road, London.

The House was named ‘Nazareth House’.  Nazareth was the place where Jesus grew up with Mary and Joseph.  Love, joy, simplicity and prayer characterised that home and Victoire wanted each foundation to absorb this spirit.  The Holy Family is one of the principal Feasts of the Sisters.  This is celebrated on the 2nd Sunday after Christmas.