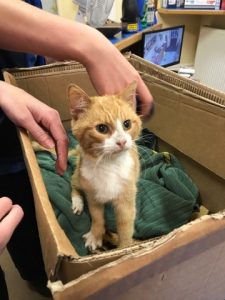 The children in the Bluebell room were playing outside on Monday 16th October when they heard a “Meow!” coming from one of their teepee’s.  On investigating they found a lovely but very hungry and injured ginger and white cat.  We took the cat to a local vet for some tender loving care and to be checked for a microchip.  Bay Vets very kindly contacted the nursery the following day with  a progress report, they have aptly named him as Teepee and he was reported to be enjoying all the attention and food!  When he was well enough they operated to remove his broken leg and he won the heart of one of the Bay Vet nurses who have adopted him and renamed him Wicket.