I represent our friary in our local parish Care for the Earth group, and was asked to give a talk from a Franciscan perspective. My main point was that we need to have a holistic understanding of our mutual and dependant relationship with the natural world, and that our action for environmental care needs to be grounded in an integral spiritual vision of the sacred unity of all creation, all creatures, and all human beings. If not, then our efforts are merely attempts at self-preservation and are reduced to functional acts that make us feel good, but are not a genuine Christian response if not inspired by a deeper spiritual vision.

To help us find a deeper grounding for our programmes and efforts, I spoke about the incarnational vision of St. Francis, in which all of reality is holy by virtue of its creation in Christ, and the consecration of the world through the incarnation. We are part of the world and, even though we are a unique expression of God’s creative activity, nevertheless share an organic unity with every element of the natural world in which we live. This relationship extends to one of both dependency and stewardship. When we behave as lords and masters of the world, striding across it with arrogant pride, exploiting and destroying it through selfish greed, we not only do great harm to it and ourselves, but scorn the face of God revealed in creation.

As part of my talk, I gave each one a colour print of this beautiful painting by Michael Divine, entitled Recognition: The Compassion of St. Francis. The central element of the painting is the light – light emanating from and surrounding every subject in the image – a soft light that does not overshadow the subjects, but enhances their presence. Each creature is haloed in this glowing light. The light refracts through the space between heaven and earth, revealing the inner complexity and beauty hidden within the vast expanse of space. And yet the light ultimately comes from above and beyond. Its source is transcendent. We pray in the liturgy from the preface for Eucharistic Prayer IV, … for you are the one God living and true, existing before all ages and abiding for all eternity, dwelling in unapproachable light; yet you, who alone are good, the source of life, have made all that is, so that you might fill your creatures with blessings and bring joy to many of them by the glory of your light. The uncreated light of God shines in and through all created reality, bursting forth from the earth itself, seemingly unable to keep to itself the transcendent glory shining out from its depths. Nothing is left untouched by the light of He who is the light of the world and renders sacred all that bears traces of His presence. … through your Son our Lord Jesus Christ, by the power and working of the Holy Spirit, you give life to all things and make them holy (Eucharistic Prayer III). And again, from the fourth Eucharistic Prayer, … he sent the Holy Spirit from you, Father, as the first fruits for those who believe, so that, bringing to perfection his work in the world, he might sanctify creation to the full.

At the centre of the image, yet not a dominating feature, is St. Francis. He is in tranquil repose holding and gazing upon the reality of which he is part. In his hands he gently holds a bird, seeming to marvel at its being and its precious uniqueness. Eyes downcast, Francis is in awe of the created world all around him, and by how all is revealed in the single creature he cups in his hand. And yet Francis is not gazing upwards towards the heavens and the source of this light. The light before him reveals the presence of the One who is the source of this light, and this is enough for him to discern the presence of transcendent mystery. Gazing into the heart of the reality in front of him, Francis’ pure spirit intuits with a knowing beyond the limited instrumental intellect, the existence, presence, and love of God. And all of this is revealed to him not in gazing up to the heavens, away from the earth, but down and around, finding God in the world of which he is part. This recognition – the title of the painting – comes from the heart and the response to this, from the heart, is a compassionate solidarity with all creation. Conversion of heart for Francis, was to rediscover and understand with renewed vision that all is one in the unity of God’s love. Francis lived in the heart and related to all from the heart. He believed that all beings, all of creation not only reflect the presence of God, but that the divine essence shines in and through them. Indeed, for Francis, the earth and its creatures are a sacrament in which God is encountered. This belief shaped his way of being in the world and the quality of his relationship with it. He treaded gently on the earth and walked with kind regard among all creatures.

This image is rich in spiritual-theological content and speaks to us of the Franciscan instinct of the sacred symbiosis between us and the living world which gives birth to us, sustains us, nourishes us, and speaks to us of the divine presence animating it from within its depths. The sacred charge laid upon us is to, like Francis, journey lightly in this world, treat with great respect its integrity, and praise God for its graced reality. Holy, Holy, Holy Lord God of hosts. Heaven and earth are full of your glory. Hosanna in the highest. 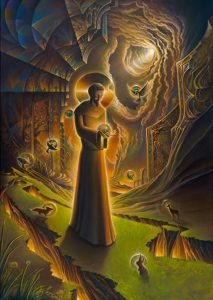