Life for me began on January 31st 1933 as the youngest of three children born to Winnie and Frank Stone of East Hawthorn.

My sister Patricia is a Sister in the Presentation Order and my brother Peter was a Doctor who died very suddenly and unexpectedly at the age of 65. He was the President of the Royal Australian College of General Practitioners.

My childhood and teenage years were particularly happy ones. All three of us were educated by the Sisters of St Joseph at Our Lady of Victories Primary School in Camberwell.  Secondary School for my sister and me was at Presentation Convent Windsor.  My brother attended De La Salle College, Malvern.

After leaving school I trained as a Dental Nurse at the Royal Dental Hospital of Melbourne in the original old building in Spring Street Melbourne next to the Princess Theatre.

God was always central in my life and I was a member of the Children of Mary Sodality praying the Little Office of Our Lady each day.

After marriage in 1956, I missed the praying community of that Sodality and sought the community of the Third Order of Our Lady of Mt Carmel, which my husband encouraged me in joining. His own mother had been a member of the Franciscan Third Order so he really knew more about it than I did.  After plucking up the courage to ring the Carmelites at Middle Park to make inquiries, I asked “what do the Lay Carmelites do”? Wondering if they visited the sick or people in prison etc., Fr Paul Clery replied “They pray that’s what they do and if you want to learn how to pray come down to our next meeting on Sunday”.  So I did and immediately felt comfortable and at home, even though most members were older than I was at 24.

In October 1957 I was formally received into the Third Order and in October 1958 I made my Profession for Life. During the years of raising 5 children I was not able to attend regular monthly meetings and eagerly looked forward to the monthly newsletters with ‘formation’ pages.  Although I had books on St Therese, St Teresa of Avila and John of the Cross, I also borrowed books from the Carmelite library to learn more about the Carmelite saints.

As the children grew up and I had more time I became more involved in my nearest Lay Carmelite Community at Whitefriars Monastery Donvale. In 1977, a meeting was called to form a national coordinating body as a previous one had disbanded.  Until that time only male members had been eligible to hold any position on a community council but Fr Ken Petersen, O.Carm, was enthusiastic with new ideas and invited me onto this new National Council with 2 other men.  Fr Ken and I worked very well together and started producing a monthly newsletter sent to every member throughout Australia.  At the time I was also Parish Secretary at St John’s Parish Mitcham and had had to learn to use a typewriter.  It was so easy to see God’s hand at work all the way in how He prepared me for each part of this journey.  During the time I served on the National Council, we organised 3 very successful National Conferences and members travelled long distances from all over Australia to attend the 3 day event.  Only the first of these events could be held at the monastery as numbers dictated we required bigger premises for the others.  Pallotti College at Millgrove proved an ideal conference centre.

The first World Congress of the Carmelite Family was held at Aylesford, Kent UK in 1991 and our Province was asked to send one Lay man, one Lay woman and one religious. I was invited to attend and present a paper on the Lay Carmelites in Australia.  It was at this Congress that the need for an International Secretariat for Carmelite Laity was first raised.

I attended another International Congress in 2001 and subsequently was invited to join the International Commission for Carmelite Laity. At the inaugural meeting of this Commission in 2002 the emphasis for an International Secretariat was a major topic and I was nominated.  My response was “You know I’m old (69), I’m deaf and I don’t speak Italian” To which the reply was, “Even if you can give us 3 or 4 years!”

Over the next 8-9 years I travelled to Rome twice a year for 3 months at a time. I lived at the Carmelite General Curia where I was allocated a spacious office.  I established an international Secretariat as well as compiling an International Directory of all Carmelite Lay Groups  and organised 2 International Congresses that were held at the Carmelite Conference Centre at Sassone about 30 Ks from Rome.  The 2006 Congress was held 12 months prior to the Order’s General Chapter and it was considered the reports from the group discussions so valuable to the Chapter that it was then decided to hold an International Congress for Carmelite Laity a year prior to each General Chapter at 6 yearly intervals.

In August 2017 I had to have 2 operations on my hand to remove a nasty skin cancer. The second operation required a skin graft and my doctor advised me to have 2 weeks Respite Care afterwards.  I already had my name on the Waiting List at Nazareth House, Camberwell, and I was fortunate enough that they had a room available for me.  I was only here 4 days when I decided I needed this wonderful kind and loving care full time as I had not been coping well at home.  I had been living mostly on sandwiches and boiled eggs!  Everything had been such an effort.  It seemed that all stress and anxiety had been suddenly lifted off my shoulders.  Of course this decision was a great shock to my family, but as always, they rallied around and cooperated wonderfully in emptying and preparing my house for sale.  I haven’t had one moment of regret and continue to be blissfully contented here at Nazareth House.  The kindly care is outstanding.  The availability of daily Mass, Holy Communion and other devotions satisfies my spiritual needs and the careful presentation of special liturgies like Lent and the Easter ceremonies provided the opportunity of entering into the real spirit of Lent and Easter.  The abundance of activities and entertainment is never ending.  The celebrations for special occasions such as Christmas, Easter, Anzac Day, Mothers Day etc. are so well planned and executed.

My own mother spent the last 15 months of her life at Nazareth and it has been the greatest consolation to me and to my family that during those 15 months my mother was absolutely 100% happy, in fact the happiest we had ever known her to be. She always had a great devotion to St Patrick and when we were children my sister and I would be sent off to school with green ribbons in our hair on the Feast of St Patrick; needless to say my mother was very much looking forward to the festivities at Nazareth for the Feast on 17th March, 1995.  She went to God unexpectedly at 6.00am on the Feast of St Patrick! 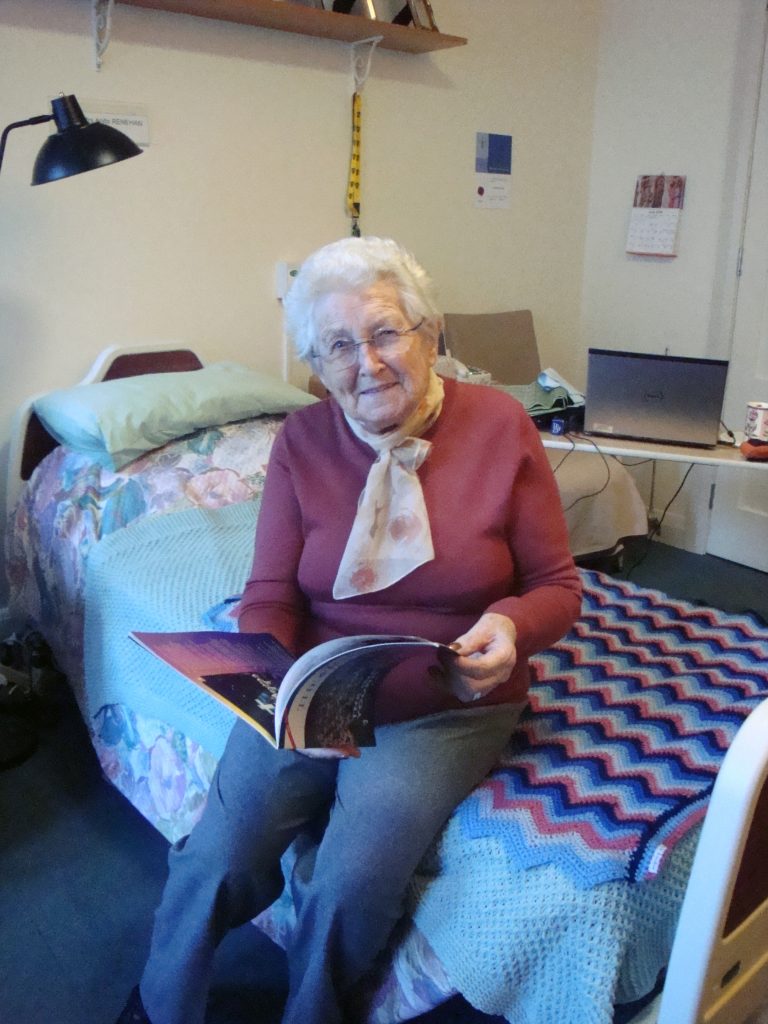